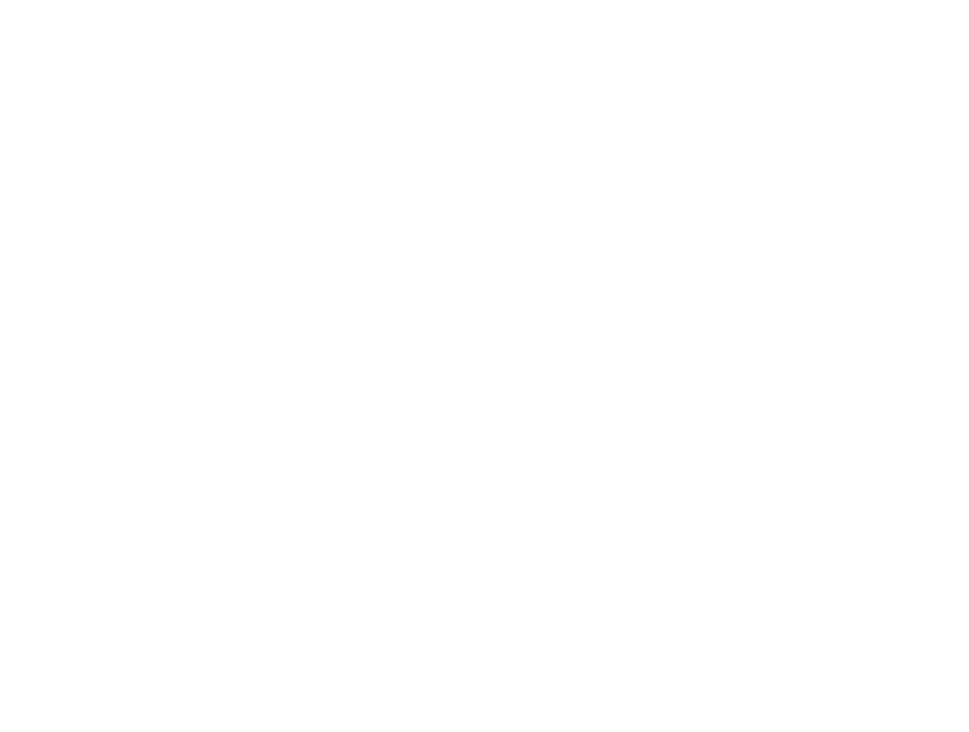 Letters of thanks from past events, losses & letters/emails of interest

Firstly, Thank you to all those who have already contacted me with their condolences and best wishes, its appreciated more than words can say at this time.

Paul Mobbs' friends and family would like to invite you to attend his funeral and/or wake.

The funeral will be at the Great Yarmouth Crematorium , Magdalene Cemetery, Oriel Avenue, NR31 7JJ on 26th November at 11:30am. Flowers from friends or family only, but donations for Macmillan Cancer Support or Parkinson's UK via Paul's tribute page at https://paulmobbs.muchloved.com are most welcome.

The wake will be held on 26th November at 1pm at The Commodore pub & restaurant, 15 Commodore Road,  Oulton Board, NR32 3NE. There will be a light buffet so if you have any food allergies please let us know as soon as possible so we can try to accommodate your needs.

RSVP's to goodmothermobbs@gmail.com ideally by 19th November please and whether you'd like to attend the funeral or wake or both. if you have any funny stories you'd be happy for the celebrant to share we'd love to hear them. We'd also love to know if you'd like to say a few words at the funeral or even have a photo or two you're happy to share. Please send to the same email address.

This is just a quick email to let all in the group know that Paul Mobbs passed away in the early hours of Saturday 23rd October due to cancer.

There will be an update you all regarding funeral arrangements for those who would like to attend. It will be at Great Yarmouth.

If anyone would like to contact his daughter Ruth, please go ahead and do so via goodmothermobbs@gmail.com.

Replies to the enquiry below:

Please forward the enclosed details and image to Peter.   Thanks.

MSC No. 4002 ‘Arundel Castle’ was one of two built in 1958 by Hudswell Clark for the Manchester Ship Canal.

They both had 400hp National engines, maximum speed 15mph, and were allocated to Mode Wheel Shed and worked in the Trafford Park area.  The photograph taken alongside the road was probably on Trafford Wharf Road, not far from the Kelloggs Cornflake Factory.  In another life I used to cycle through Trafford Park, but MSC used steam tank engines in those days.  I guess the photographs date from the late-1960’s and would have been an organised tour of the Trafford Park area.  Normally brakevans were used for visits to industrial lines on BR, but most private companies used open wagons as they did not have their own brakevans.  Whilst you are absolutely correct in regard to H&S Act concerns, in those days the visit organiser had to sign a release document prior to the commencement of the visit, which released the company from any personal liability in regard to the visitors.

I think I have found out when those photos were taken. I reckon it was a trip on the Manchester Ship Canal Railway system by the Branch Line Society in 1978. I suspect that the 3rd photograph was probably taken on what is Trafford Park Road where the railway ran alongside the roadway. The problem is that so much of Trafford Park is now unrecognisable.

The H&S aspect is so out of line with what we now have isn’t it. I can remember being taken on a day trip out on an organised special train in Derbyshire over what was then the Cromford and High Peak line between Buxton and Cromford Wharf on what is now the Matlock branch. We travelled in normal BR carriages to an old station called Parsley Hay which is now a cycle hire centre just off the Buxton to Ashbourne road A515 and then made our way over the BR line to Cromford in wagons just like those in the photos of the MSC trip. My Dad took a few photos which I still have, I would have been around 10 years old I think.

Hope you are keeping well, I was told that this probably somewhere near Manchester, those who know the area may recognise it? What I noticed was first the open wagons then the small children present and things like ladders to get in and out cannot see anything remotely like this bring allowed at all nowadays,any idea of the date maybe the 70’s ? 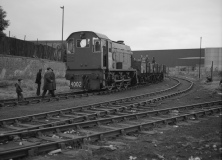 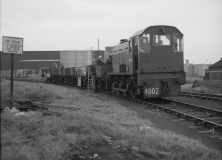 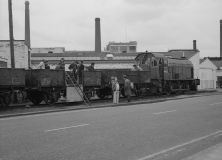 Well, the clock items got the conversation ticking along

Why is it light at 2am?  Well Blackburn is almost within the artic circle

“So far as I know the separate Telecoms department was created in 1967, so before that the S&T was the Signal and Telegraph department. It was split into mechanical and telegraph lineman. A big station would have a telegraph lineman who would look after the non mains electrical equipment.

As it’s daylight in the picture I think this picture is the clock being cleaned. Altering the clock would be done at night, as night trains would need the locks changed at the correct time.   MMcG

I used to adjust all clocks around the Liverpool area from the late 60’s onward.  There were master clocks at Liverpool Edge Hill Allerton, DItton, Runcorn. Later all the clocks were connected to the master at Liverpool. There were repeaters at all stations on the main line up to Weaver Jnc.   Mersey rail was added when the loop and link were opened. We also did the large clocks on Lime Street Station.  It used the pulses from the master in Rail House.  I could go on but that’s enough for now.  Cheers for now Brian Berwick.

1. I don’t recognise the person working on the clock.

2. The article doesn’t give an exact date, but I remember going to Blackburn in the early-1960’s when the ship model was on the platform, as the Telecoms staff in the Divisional Office at Hunts Bank used to provide a temporary P.A. system on the station for use during the annual ‘Wakes Weeks’ when the cotton mills would close for two weeks and there would be multiple special excursion trains each morning heading for seaside resorts all over England and Wales. The P.A. system would be taken down at the end of the second week and moved ‘to another station in East Lancashire for the start of their ‘Wakes Weeks’.  At that time there was no Telecoms staff providing coverage at Blackburn, so it is likely that the local Telegraph Lineman would have been detailed to change the time of the clocks.  I find it interesting that he is actually working on the clock face, as this is a mechanical wind-up clock, and you can see the drive rod running back into the station office where the mechanism was located. There was another clock on the other platform driven by the same drive rod and changing the time could have been done from the office.

3. There would not have been a dedicated Telecoms team until some years after Ladywell House was built. When I was in the Telecoms Office in the Divisional S&T Office at the Hunts Bank Building, I worked with Stan Clarke, another character from the past!  Around 1963 we were given the job of providing an additional position on the manual exchange switchboard at Preston Station to cater for the staff who were being centralised from outstations into Ladywell House. At the time this was a tricky operation, as carrying out this kind of work on switchboards had not been done since during WWII, as it was necessary to prepare for extending the cabling loops feeding the rows of cord jacks on the other two switchboards during the week, then insert the new switchboard into the loops at a weekend. All the wiring had to be done in the back of the switchboard positions, so it was a time-consuming job with a soldering iron in a confined space.  After the new telephone exchange was provided in Ladywell House and the transmission equipment was transferred there, Stan Clarke became Preston Telecoms Supervisor, so that was the start of there being an out-based telecoms organisation north of Manchester with dedicated telecoms staff at Lancaster and Carlisle reporting to Stan. Providing full coverage of equipment at other locations came sometime later when there was a major re-organisation.

1) Anyone know the person?

2) Would it be a telecoms person or other discipline?

Northenden Junction is included on the FARSAP web-site:

Very Tall Signalboxes - Anyone able to help Peter Out?

Anyone got any stories for these 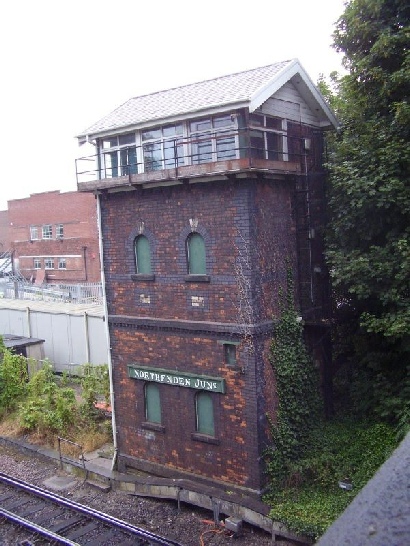 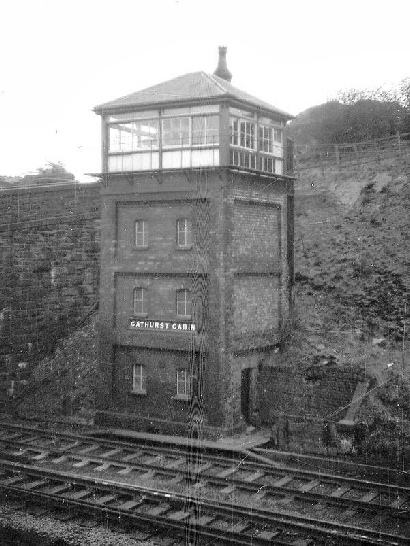 I have just put the phone down from speaking with Stan’s wife Susan.

Stan is in a coma and not able to speak or even have Susan by his side, of ward 18 at Leighton Hospital, Crewe.

operations for the Bowel cancer and he has had multiple bouts of additional infections.

He did not know Susan the last time she was able to go and see him.

She is just keeping her fingers crossed that he will come out of this coma.

I will let you know if anything changes.   Ron R

I’m saddened to report that Eddie passed away on 3rd Sept in the care home that he had been in for the last 3 years.

The cremation will take place at Crewe Crematorium on Wed 22nd Sept at 14:45

I’m retiring, so it would be a delight to see you for a pint or two to celebrate at The Wharf, 6 Slate Wharf, Castlefield, Manchester, M15,4ST on Friday 17th September from 16.00 onwards outside. There will be some money behind the bar, so just book to Claire Beranek when you order the drinks. Do pass the invite on to any railway chums that I may have missed.

Look forward to seeing you if you can make it,

I have heard from my near neighbour, (Jeremey Rawlings), that Mike Benford has recently passed away.

I don’t have any more details than that.

Jeremy does not yet have any details of the funeral service, if you wish to attend it I will get you in touch with him, so he can pass details on when they are known.

Tony Ball was for some time on the signal side as a shift lineman at Crewe North Junction he was also part of one of the signalling installation gangs at Crewe.  He then joined the Telecoms side as a Technician  at Mercury House maintaining the Strad System (Teleprinter Switching System) along with Ted Walley and Joe Pickering.

I have notification from Graham Boulton that Norman Gregory died recently. Graham is Norman's nephew

Many will remember Norman as the transmission engineer on the LM Region at Carlow Street before moving to BRHQ to join my data team. He was a great guy and knew all the ins and outs of transmission. Norman retired in 1988, well before me, but maintained an interest in ralways right up to the end including having an O Gauge model railway. He lived in Bedford.

Graham also worked for BR but joined after Norman had retired. He now works for Atkins in the Signalling Scheme Development group and has been involved with immunisation on the Midland Main Line, which was something Norman was heavily involved with for the WCML

Norman never kept in contact with people after he retired as far as I know. He would have been around 81 years of age. Can you put the usual message out please

I have some very sad news to share with you all.  Dave Cook passed away suddenly last night.

Dave died very unexpectedly in his sleep. He was apparently fine yesterday and went to bed as normal.

So the cause of death is not yet known.

I was contacted this afternoon by Dave’s son in law.

Dave’s family are all in deep shock, his wife is staying with one of their daughters and Son in Law for now.

A real shock for us all.  I have known Dave for over 30 x Years

​After a career that pre-dates Brexit, Peter has filled in his last time sheet for NR